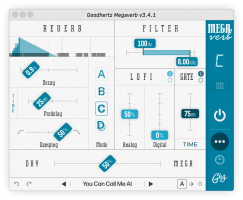 Megaverb is available for purchase on the Goodhertz store for $95.

Goodhertz has also updated their entire line of plugins to v3.4 with several improvements and bug fixes, including:

v3.4 is a free update for existing Goodhertz customers, an is available for download now.