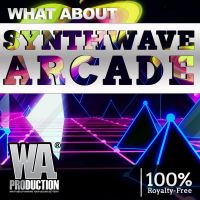 W. A. Production has released What About: Synthwave Arcade, described as "a modern fusion of old-school classic sounds blended together in a way that has never been done before".

Synthwave Arcade features the funk of nu-disco, the past future atmosphere from the 80s, and rhythmically thumping retro wave synths, providing an inventive hybrid spin on synthwave.