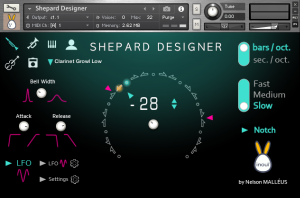 inouï samples has announced the release of Shepard Designer for Kontakt.

The Shepard tone is a famous auditory illusion faking an infinite rise or fall. Shepard Designer allows a user to create this effect. The instrument comes with 144 varied exclusive instrumental sources, and can works with a user's own sounds.

Two main knobs allow you to change in real time: