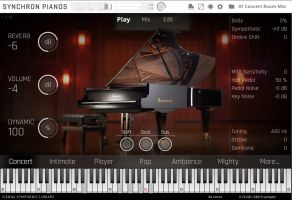 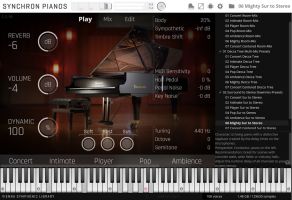 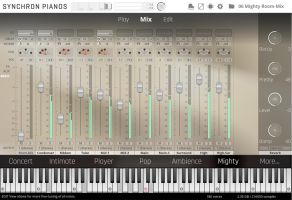 The Vienna Symphonic Library has announced the release of Bösendorfer Imperial, a new virtual representation of a Bösendorfer Concert Grand 290 Imperial that features nine additional sub-bass notes for a total of 97 keys.

The instrument was captured at the large Stage A of Synchron Stage Vienna from 11 microphone positions and comes with Vienna's powerful and free Synchron Piano Player.

The Imperial's tonal character, especially apparent in the pianissimo to mezzoforte range, was meticulously sampled in finely calibrated velocity steps using Vienna's proprietary piano "robot", which was further developed and perfected for this effort. To guarantee a consistent sound over all keys, velocities and note lengths, the total recording production time was scheduled as tightly as possible to minimize even the smallest changes in the instrument's sonic behavior. A sufficient block of time was reserved at the Synchron Stage, but after recording nearly 24 hours a day it still took several weeks to capture the 290 Imperial in its entirety.

As with all the instruments of Vienna's Synchron Pianos series, this Bösendorfer 290 Imperial enjoys permanent, climate-controlled residency at Synchron Stage Vienna, whose main hall is characterized by its particularly warm and natural ambience. The large 5,813 sq.ft. (540 m2) Stage A has lent its acoustic signature to numerous international productions, from classical chamber music to international, large-scale orchestral film scores.