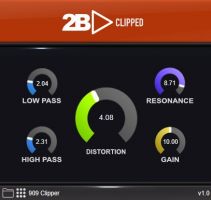 2B Played Music has released 2B Clipped, a new distortion plugin available as a free download in VST2 and VST3 formats for Windows. After registration customers will receive a coupon to get 50% off on the next order.

2B Clipped is a distortion plug-in based on the distortion and filter engine that 2B Played Music built for their top selling plug-in 2B Filtered.

2B Played Music added small pieces of their developed filter 2B Filtered so that you can transform exactly that part of the sound that is needed.