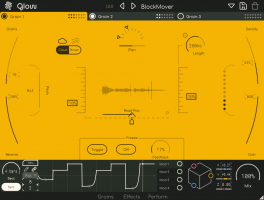 Lese has released Glow, a VST3 / AU audio plugin for performing "Mass Granulation", which, according to their website, involves using optimized techniques to overlay a large amount of grains on top of one another. However, it is not limited to this. Here is more information from the announcement:

Featuring three granular engines, three post-processing effects, and four modulators, Glow is a powerful tool for any musician looking to add complex, multilayered fragments of sound to their productions.

At Glow's core is three independently controlled granular processors. With visual controls reminiscent of aircraft HUDs, these processors take in your audio, and return a jittery, fractured representation of it.

While the typical granulation method is offered through the use of Stream Mode, Glow's other method, Cloud Mode uses intelligent optimizations internally to allow each engine to process up to 50 grains overlaid upon each other for an effect previously unheard of. (3x50=150).

The output of each of these engines can also be fed back into itself to be further processed. This feature is used extensively in some of the demo presets to create multilayered "pseudo-reverbs".

Your Modulation, Your Way

Glow's four modulators go beyond what is usually available in effects processors.

Our system allows you to work off of a selection of "primitive" shapes, and click & drag extra points onto the line to get it controlled exactly how you want it. When ramps are created, you can drag your mouse over the circular dot to specify the curve of the ramp for even further shaping.

Additionally, you can select the pencil icon to draw shapes directly; Specify the grid snapping, the shape to draw, and then drag to paint any shape you want.

Glow is designed to be frozen. Either control freezing & unfreezing manually, or use either the rate retrigger mode (synchronized to the DAW or free-time), or the envelope-based retrigger (and the source retriggering the audio can even be external through use of your DAW's sidechain routing).