SoundHack / Tom Erbe has announced the release of the Delay Trio - a group of three plugins that Tom developed as class demonstrations while teaching computer music and studio technique at UC San Diego. All of these are derived from the same basic delay algorithm: a hermite interpolated delay line with variable modulation, and a feedback loop with dc blocking and saturation. Pitch shifting is achieved with a dual head crossfading delay (ala Eltro Tempophon/Dennis Gabor/Pierre Schaeffer phonogene) and is decidedly low-ﬁ. The saturating feedback also allows them to be great drone and noise generators. 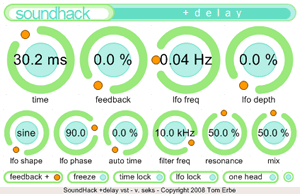 The three plugins are:

This version (6.06) can be considered the first real release - since the beta Tom has added MIDI automation to +pitchdelay, and expanded it in +bubbler. Also +delay now has a cleaner, deeper feedback loop.

These plug-ins are available for Windows in VST and RTAS formats and Mac OS X in VST, RTAS and AU formats; all are freeware.