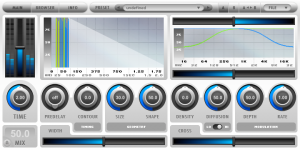 Breeze offers a minimalist GUI design that focuses on instantly communicating the most important preset information to the user, and summarizing this information graphically in two intuitive graphical displays. Macro controls combine many complex, behind-the-scenes DSP parameters into a compact set of nine knobs and four sliders. Parameter ranges and scaling are optimized to make it almost impossible to create a bad sounding preset. Signal gain has been meticulously balanced to the point of making the need to adjust the gain control almost obsolete, leaving users with one less thing to worry about and free to focus on more important details.

Breeze has been highly optimized to reduce CPU usage as compared to Aether and other products in the market. Breeze is furthermore designed to intelligently use only as much CPU power as is absolutely required for a given preset, and automatically disables various parts of the algorithm when not required to conserve energy. Breeze also offers an additional "Hi-Lo" switch to further push efficiency into even deeper shades of green. Breeze is the ideal reverb choice for laptop use, and live performance. When used with current top-of-the-line studio workstations, over 500 instances of the plug-in can be run in real-time depending on settings.

Breeze shares some things in common with its older cousin, Aether, but it also has many differences, and brings a few new things to the table that have yet to be implemented in Aether including:

Breeze has a MSRP of $149.95. Orders are handled via download at the Galbanum web-store at this time. All products are available immediately.