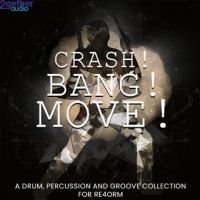 Created by Dan Maurer, expert sound designer and additive synthesis specialist, the attention to detail in this expansion pack of over 200 sounds is designed to be impeccable. Additive kick drums, snares, hi hats and percussion sit alongside a set of very creative rhythmic bass and melodic sounds. Existing RE4ORM users will also appreciate a set of new Free4orm LFO shapes to add to their own sounds.

"Dan Maurer really surprised us with this one. We knew RE4ORM could produce a wide variety of sounds, but he really blew us away with these percussive, bass and melodic sounds that pulse and groove in perfect sync with your music project, " said Patrice Tarabbia, lead software developer and musician for 2getheraudio.

RE4ORM is a Free4orm Additive Synthesizer which allows users to draw their sounds using their mouse, a much more intuitive way for musicians to work. Two draw modes allow for reshaping or forming completely new additive oscillator sounds. Users can also draw or reshape RE4ORM's Free4orm LFO shape which adds tempo-synced modulation to RE4ORM's filters, again in perfect time with their song tempo. RE4ORM supports 64-bit VST, AU, AAX capable DAWs and includes a Standalone app for use without a DAW. It is Mac and Windows compatible.

Price: RE4ORM and Crash Bang Move are both released under 2getheraudio's Pay-What-You-Want (minimum $10) business model so nearly all musicians, regardless of their ability to pay, have access to this software.