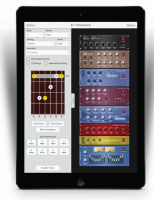 StompBox Band provides the flexibility to have two effect racks running at the same time combined with the ability to utilize audio interfaces with multiple inputs and outputs.

Ideal for bands on a budget, with two separate effect racks for different band members with the ability to output either a mix or separate outputs to your amps.

You can even pass a single guitar through both effect chains and morph between the two depending on how loud you play.

Band Edition includes a Chord Explorer to audition your patches whilst making modifications.

Song Mode enables you to save commonly used patches and chords to song files.

Band Edition also has a built in Chord Explorer and Song Mode, allowing you to save commonly used patches and chords to song files. Use the Chord Explorer to audition your patches whilst making modifications.

StompBox and StompBox Free Owners can quickly and easily share their In-Apps Purchases with StompBox Band, no need to buy them twice.