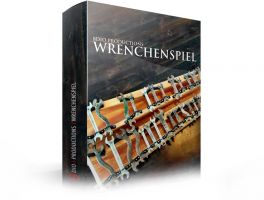 8Dio has released: Wrenchenspiel, a custom made instrument for Kontakt designed from 31 toned wrenches.

The wrenches were modified (carved) to be in perfect tune and 8Dio managed to get some of them to sustain their notes up to 10 seconds. The wrenches were played with everything from soft to hard mallets, muted variations, hammers, hotrods, modified metal objects, other wrenches, nails, drumsticks and they even ran electricity through the wrenches for extra punishment. The end-result is a versatile, tonal percussion instrument that can sound like anything from a Glockenspiel to Celeste, from traditional Rhodes to absolutely brutal mutilated music sound design.