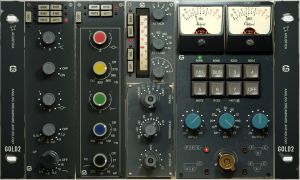 They say "The realization of Gold2 is the result of our continuous search for vintage and rare outboard processors and our desire to achieve the utmost quality in our emulations. This bundle represents a one-stop-shop solution for any lover of the sound of the vintage British consoles. The rarity of the emulated device and the detail of the emulations make this plug-in as precious as pure gold."

The Gold 2 suite adds an additional uber-rare EQ, possibly a unique piece say AA, and 3 new preamps, each one embodying the original spirit of Gold and providing the authentic sound of the emulated gear. The suite was also upgraded to AA's latest CORE 12 tech and features an extended threshold range for better compression behavior.

Acustica Audio say CORE 12 represents a huge leap forward in their technology. Not only is the CPU load greatly reduced, allowing you to use more instances in a mix, but the sonic authenticity it achieves "is on a new level".

This 2nd edition of the Gold plug-in series includes: 6 different equalizers, 2 extremely rare compressors, 7 preamplifers (for a total of 15 preamplifiers available inside Gold2Pre 'standalone version') and a routing control section, making it a comprehensive vintage anthology.

There is an introductory/pre-sale price of €169.15 (15% off) during the first 4 weeks of this release or until a final version is released. After this period the price will be €199. This upgrade is completely free of charge to owners of the first version of Gold.

This initial pre-sale version of Gold2 will be released only with 44.1kHz and 96kHz native sample rate vectors. 48kHz and 88.2kHz vectors will be released at later date in September. The use of the plug-in at 48kHz and 88.2kHz sample rates is still possible. However, users may experience slower plug-in load time and slightly worse sound quality due to the applied internal for the plug-in vector sample rate conversion process.