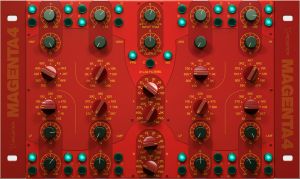 The upgrade is characterized by a GUI restyling, better sound quality, with a much lower CPU strain, a completely resampled EQ section, the inclusion of plenty of highly sought after devices, and a new engine based on the latest technological developments of their CORE 12.

Magenta4 is a suite that includes six different plug-ins:

Specifically, this plug-in includes the emulations of the following gear:

Price: €199. There is a special pre-sale price of €169.15 (15% off) for the first four weeks after release or until first official version is released.

This upgrade is free to all who already own a Magenta 3 license.