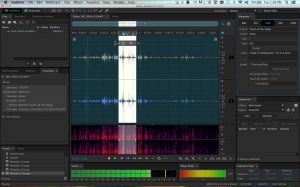 On their blog, Adobe has revealed this sneak peek at what's coming in the next update for Adobe Audition CC 2014.

The first thing you'll notice is a dramatic new interface update, with support for high pixel density (HiDPI) displays. A new UI modernizes the look and feel of all Adobe digital video and audio applications, sporting flat icons, cleaner panels, and high-visibility highlights for better component and panel focus. HiDPI support means those of you with retina or high-resolution displays will see sharper, defined icons and components, reducing eye fatigue and enabling preview of video content at full resolution. Scaling options means you can build your workspace and easily display as much or as little information as your workflow requires.

This update also implements iXML support, which is popular standard for embedded metadata in production media files. Devices or software used in location recordings can embed information on Project, Scene, Take, Comments, Timecode, and more. This metadata can be viewed, modified, or created in Audition and follows your media throughout your production pipeline.

They've made a change to one of the most popular effects in Audition, the Speech Volume Leveler. This tool has been valuable for correcting fluctuating loudness levels in recordings, but for many location recordings, background noise has fluctuated with the speech, making some audio still unsuitable for production. A new parameter, Target Dynamic Range, assists the algorithm in finding a better balance between amplification of speech content and reduction of noise, allowing you to "dial in" the perfect setting for your needs.

The new updates to the Creative Cloud video apps and Adobe Anywhere for video are expected to ship in the coming weeks.

AuditionAudio Editor
by Adobe     $349
Add A Review My KVR