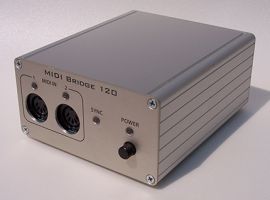 The MIDI Bridge system allows you to record MIDI instruments and controllers with pin-point accuracy. That means NO jitter. MIDI is recorded precisely as it is performed. Using Advanced Pro Gear's MVS (MIDI via S/PDIF) technology, the MIDI Bridge 120 takes input from your MIDI instruments and controllers and sends the MIDI to a VST Plug-in in your workstation's recording application through S/PDIF audio. The MIDI is then given to your recording application from the Plug-in. This method bypasses all of the system issues that cause timing glitches with other MIDI recording interfaces.

The MIDI Bridge 120 is available now for the introductory street price of $199 at the Advanced Pro Gear web store.