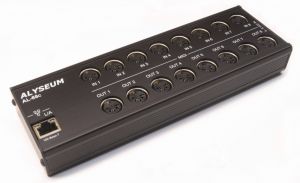 Here's what they say: "Since the beginning, the musicians asking an AL-88 at an affordable price. Well, that's done, the AL-88c is there (c for compact). As her big brother, exactly the same performance for the MIDI. For the rest, see the picture. Of course, the AL-88 is still available for professional users."

An AL-88c allows you to connect 8 MIDI In and 8 MIDI Out ports, simply and in a flexible way to patch, remap, filter and merge MIDI flows on a fine channel basis. Expandable by multiples of 2 or 8 MIDI I/O ports to create a unique patch-bay which also encompasses up to 32 virtual MIDI ports in every computer (Win or Mac OS). AL-88c offers the top performance in terms of MIDI throughput and latency/jitter far below 1 ms.

AL-88c was tested against numerous Mac & PC programs - including MIDI Quest - for a perfect handling of the touchy SysEx exchanges of past synthesizers.