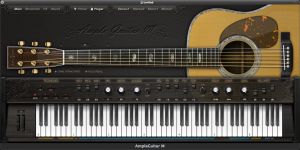 AGM is recorded on the Martin D-41 acoustic guitar, with 3842 dry samples and a total size of 5.61GB. Original samples have been recorded as 24bit 44.1khz stereo. Natural sustain and resonating sounds of the guitar are unadulterated. No looping samples.

The samples are categorized in two banks: Finger and Picking.

As with other Ample Guitar instruments, AGM is also featured with the following functionalities and techniques: Hammer On & Pull Off, Legato Slide up & down, Slide in Below & Slide out Downwards, Palm Mute, Natural Harmonic, Popping 9 guitar techniques, Legato at random length, pitch & poly.All techniques can be played in Legato mode, even when strumming.

By using real strumming samples with customized chord, rhythm and tempo, AGM Strummer combines the advantages of both sample-based and simulation strumming techniques with following features:

AGM provides 2 Stereo and 2 Mono sound modes natively, which simulates different retrieval of the sounds collected from the recording microphones. The microphone volumes and sound width are adjustable under lossless quality.

Price $169. A full bundle of all Ample Guitars is available for purchasing at $399, including 4 guitar instruments (AGM, AGF, AGG, AGP).

Amplesound All Guitars Demo by Dirk