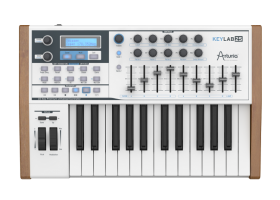 Music software and hardware company Arturia has announced the launch of the KeyLab Series, its newest professional-grade series of MIDI keyboards, combined with the powerful Analog Lab software.

With their load of keys, knobs, sliders and pads, they give you the fullest control over the 5000 analog synth presets available in the software. The KeyLab also act independently as universal MIDI keyboards, perfect for studio and live use.

Choose between the rugged and lightweight KeyLab 25 keyboard, a must for travel, or the KeyLab 49 and KeyLab 61 who will give you more controls over your sound.

As professional hybrid synthesizers, the KeyLab controllers offer the immediacy of a hardware synthesizer combined with the flexibility of a software based solution.

The keyboards are entirely preassigned to work with the Analog Lab software, enabling you to take an immediate and in-depth control over your sound.

But the KeyLab also act as a Universal MIDI controllers, compatible with any third party software and hardware. MIDI Assignments can be customized using the LED screen or the included MIDI Control Center software.

The Analog Lab software gives you a new depth of control, so you can customize the huge library of 5000 internationally designed presets.

The Multi mode allows several sounds to be played at the same time with the addition of effects, layer/split functions and the chord mode.