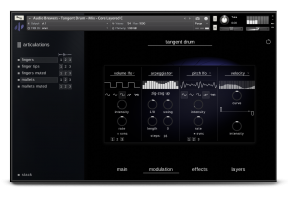 Audio Brewers has released Tangent Drum, a steel tongue drum recorded, mixed and delivered in ambisonics and stereo. This means that regardless of DAW or delivery method, Tangent Drum can adapt to any speaker array configuration from stereo, all the way to binaural, surround, spatial audio, atmos, and even VR applications and custom speaker arrays.

A total of 28 Articulations

A traditional overhead mic position, but this time in immersive ambisonics, allows the user to hear the sound in a three-dimensional sound field.

Additionally, an ambisonics microphone was placed inside the tongue drum so as to capture the sound from the inside of the resonance box. Thanks to the immersive technique, the user can feel the sound as if they were inside the instrument.

A macro mic position was also explored, using an extremely sensitive mic placed as close as possible from the source of each and every tongue.

Because a tongue drum contains just a few notes, Audio Brewers developed a technique to be able to stretch the pitch range of the instrument throughout 6 octaves without pitch artifacts on the transients. Thanks to this, the user will be able to freely play their MIDI controller with transparent sound.

Additionally, because a tongue drum resonates in a unique key, Audio Brewers has also assembled patched that will be consonant with multiple keys (C, D, E, F, G, A, B).