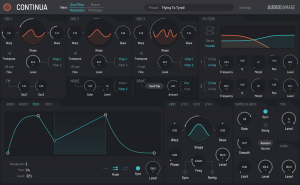 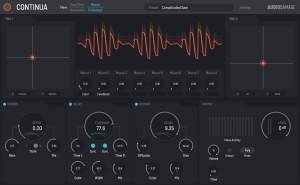 Audio Damage has announced the immediate availability of Continua, its new plugin instrument for Mac, PC and iOS (iPad only).

Described as "a thoroughly modern, creatively inspiring synthesiser, particularly well suited to ambient and other 'chilled' genres," Continua has been designed with a focus on super smooth waveform morphing and sophisticated yet accessible modulation.

An immediately intuitive three-oscillator analogue-style synth with two filters, up to 16 unison voices, copious polyphonic modulation sources and three onboard effects, Continua puts highly controllable waveform morphing at the centre of its architecture and workflow. Bringing the deft harmonic shifts of wavetable synthesis to mind, Continua's oscillators sweep seamlessly from outputting sine through square to saw waves; each of the four LFOs transitions from a double sine to square, via triangle waveshapes; and the dual independent filters morph continuously through low-pass, band-pass, high-pass and notch responses. Skew and Warp controls enable further manipulation of oscillator and LFO waveforms, and all morphing controls can be modulated for pads and textures that constantly evolve right at the oscillator/filter level.

There isn't a single knob in Continua that can't be modulated, from those controlling the oscillators, filters and effects to the parameters of the modulators themselves. Four LFOs, two ADSR and two multi-stage envelope generators, a Sample & Hold generator, two XY pads and eight macros are freely and effortlessly assignable by right-clicking any target control. And with every LFO and envelope being fully polyphonic, the expressiveness of your performances needs know no bounds, especially when using an MPE-compatible controller.

Like the oscillators and filters, Continua's three effects are tilted towards the production of sustained, ambient-orientated sounds. The Reverb is particularly notable, housing a custom algorithm geared up for very long, dense, heavily modulated tails; while the Chorus and Delay modules bring voice-stacked thickening and evocative spatialisation.

"We wanted to build a modern, more experimental virtual analogue instrument – one that departed from the current trend of wavetable synths. Our goal was for Continua to be simple to use and very smooth, with a 'morph everything' approach, and the end result is a synth with endless sound design potential, and a characteristic affinity for pads, soundbeds and atmospheres. We couldn't be more proud to share it with the world.

Find out more in the introductory video: YouTube.com/watch?v=aEm6nBkG52Y