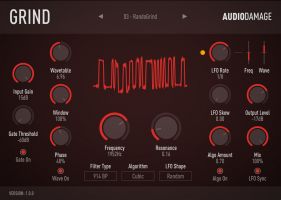 Audio Damage has announced the release of Grind, a new plug-in described as "a true powerhouse of audio warfare, Grind puts the "damage" in Audio Damage". From subtle tube-style saturation to full-on mangled wavetable distortion, AD says Grind is a Swiss Army Knife of sound design.

Grind consists of three main blocks: wavetable lookup, in to algorithmic saturation/distortion/, and finally to a multi-mode filter. The wavetable module uses the amplitude of the incoming signal to replace the sample with one from 15 different linearly-interpolated wavetables, chosen for their mangling potential. Window size and phase controls provide further tone-shaping possibilities.

The next stop is the algorithm module, with eleven different distortion and saturation algorithms, from simple soft-knee saturation on up to full on sine warping.

After this, the signal passes through a multi-mode filter stage, with eleven different filter models to choose from, including "vintage digital" versions from the early days of plugin development, on up to AD's modern analog-modeled MS20-style lowpass and highpass synth filters. A tempo-synced LFO provides motion for the filter frequency, and a final stage of soft clipping and DC filtering tames the output.

AD says "Make no mistake: this is not a subtle, polite tool. With careful tuning of the provided presets, it can be tamed to normal filtering and saturation duties, but on the whole, it is a noisy, snorting beast of a plug-in, and is happiest with Full Metal audio destruction."

Also, the free FuzzPlus3 plug-in has been ported to AAX and updated to v1.0.1, fixing a couple of little bugs. FuzzPlus3 is now VST/VST3/AU/AAX.