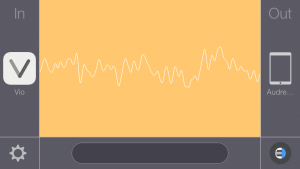 Audreio has announced that full-bandwidth audio streaming is now available to musicians utilizing desktop DAWs and iOS for music production. Using your existing router, Audreio's Audio Unit plug-in streams audio (wirelessly or with a cable) from one device to another. No audio interface needed. The plug-in features a clean, straight-forward design, and since Audreio automatically detects all available devices on the same local network, making a remote connection is extremely easy.

Earlier this year, Audreio's iOS app introduced mobile musicians to high-quality wireless audio streaming between iOS devices. With the release of the AU plug-in, Audreio brings its core streaming technology to the music production industry's most popular and powerful desktop DAWs. In conjunction with Audreio for iOS (sold separately) users can conveniently stream audio between any combination of iOS devices and desktop DAWs. Simply instantiate Audreio AU in your DAW and all supported devices on the same local network will be available to connect with — no IP addresses to enter and no complicated set-up to deal with.