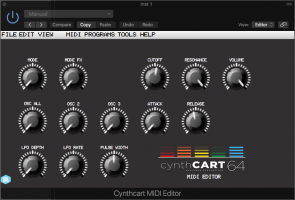 Cynthcart is a popular cartridge for the Commodore 64 that turns the old computer into a synthesizer, using the onboard SID chip(s).

With Cynthcart and a MIDI interface you can hook the Commodore to your Mac or PC and/or play it from an external MIDI keyboard.

This MIDI Editor allows to easily edit and automate most of the synth parameters using MIDI-CC commands, such as Cutoff and Resonance of the filter, Attack and Release of the Oscillators, LFO rate and Depth as well as PWM and other parameters.

Cynthcart MIDI Controller is available for both Mac and PC, as a VST/AU plugin or as a Standalone app.

Made with CTRL. Thanks to Tim of Sharewareplus for the permission to use Cynthcart Logo.