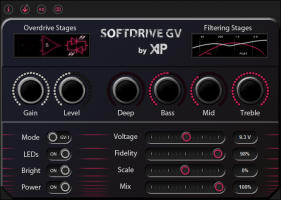 SoftDrive GV faithfully recreates circuits of both stomp-boxes and expands on the original design introducing features possible only in digital realm.

SoftDrive GV is free and is available as a 32- and 64-bit Windows VST effect plug-in.

SoftDrive GVDistortion
by AXP  Free
Add A Review My KVR