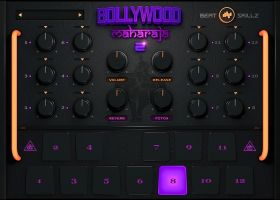 Beatskillz has launched Bollywood Maharaja 2. The follow-up to Bollywood Maharaja Vol 1, it includes new processed drum sounds, both Indian and urban, as well as instrument and vocal one-shot slices. The library contains 600 sounds.

Beatskillz recorded Indian Percussion, Vocals & Instruments with musicians from Bollywood. All these sounds were then treated with outboard EQs and Compressors in an effort to make them more punchy in the context of today's music.

The plugin features 50 kits intended for Trap, Hip-hop, OVO, EDM, or a user's own genre.