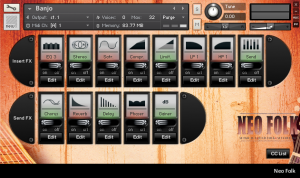 Big Fish Audio has released Neo Folk, which features "24 contemporary Folk construction kits for the modern producer". This product is part of Big Fish Audio's KLI series, which includes a custom Kontakt interface, plus the content is available in acidized WAV, REX, and Apple Loops formats.

With the recent enormous success of artists like Mumford and Sons, The Lumineers, The Civil Wars, Alabama Shakes, The Avett Brothers, etc., the past couple years have seen Neo-Folk saturating the airwaves. Not only brought in by artists and performers, Neo-Folk has become extremely popular in commercials, film, and TV music.

Neo Folk is an amalgam of roots music created by the confluence of the shared traditions that make up the Americana musical ethos, specifically those sounds that are merged from Folk, Country, Bluegrass, Roots Rock, and Blues.

The spirit of Neo Folk draws parallels to the ideals of Americana, Indie Rock, and Indie Folk, resulting in a distinctive roots-oriented sound that lives in a world apart from the pure forms of the genres upon which it draws.

This collection of 24 Neo Folk construction kits include all the Bluegrass and Folk instruments that embody the ever-popular genre: banjo, mandolin, dobro, fiddle, and guitar, each played with a rhythmic style based in Alternative Rock and Folk. The instruments are performed by an all star line up: Dennis Caplinger (JJ Cale, Eric Clapton) on guitar, dobro, mandolin, fiddle, banjo; session bassist Josquin des Pres; and groove master drummer Danny Barragan (Frankie J, Pitbull).

These construction kits are 100% royalty free and ready to use in songs, music libraries, film, TV, commercials, or any form of audio production. Inject some Neo Folk roots flavor into your music with this fastidious collection of instrument loops and samples. Use as full construction kits to build a track around, or individually cut up and process the loops for a more experimental use. Finally, all the content is available in acidized WAV, REX, and Apple Loops.

This product is part of Big Fish Audio's KLI series, which includes a custom Kontakt interface. The Kontakt format features patches of each loop. Customize each loop with the "sliced loops" patches. The Sliced Loop patches lay out each individual slice of a loop across the keyboard, making it easy to create new and original custom parts. The "Kit Combos" allow you to arrange full construction kits quickly and easily with a custom mixer and a host of included fx. Create, arrange, tweak, and mix all within the Kontakt format. Neo Folk also includes Multi-Track Drums which are all individual mic placements on the drum kit for custom mixing.

Neo Folk Kontakt format also includes "Instrument Set" patches where each group of instruments has been given their own instrument to quickly find the exact part to fit your needs. For example all the Banjo loops from the whole product can be found in the patch called "Banjos.nki".

The KLI version of this product comes in both Kontakt 4 and Kontakt 5 versions. For those with the full version of Kontakt 5, take advantage of the new high quality and extremely flexible new time stretching algorithm as well as a bunch of new included FX.

The Full version of Kontakt 4.2 or higher is required to use the KLI version of this product. This product does not work with the free Kontakt player.