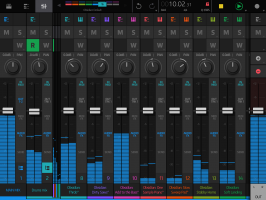 NanoStudio 2 adheres to the same design principles as its predecessor, but has been completely rewritten for a new generation of mobile music makers.

Designed for end-to-end music production, NanoStudio 2 is designed to take a user from the idea stage to a final master. It can host AUv3 plugins or as a wholly self-contained app by utilizing its built-in instruments and effects.

NanoStudio 2 has many more features than those listed below. Find out more on the KVR Audio Product Page or the Blip Interactive Website.

NanoStudio 2Music Studio for iOS
by Blip Interactive  $19.99
Add A Review My KVR