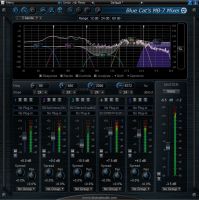 This new release mainly brings workflow enhancements, such as copy/paste capabilities, plug-ins layout restore, direct access to bypass and editor window, as well as plug-in compatibility improvements.The free broadband add-on skin has also been updated to include the new features and streamline the usage of the plug-in in single band (broadband) mode.

The plug-in can be purchased alone or as part of three bundles. Demo versions are available for download on www.bluecataudio.com, in VST, RTAS, AAX, Audio Unit and DirectX formats, for both Mac and PC (32 and 64-bit).

FEATURED
50% Off
AX73Synth (Analogue / Subtractive)
by Martinic  $59.50
Add A Review My KVR
Was $119.00; Save $59.50 until 31 Oct 2021
$59.50Buy
BUYING!XCheckout
The Orchestra Essentials
Orchestra
by Best ServiceReason 12
Virtual Studio
by Reason Studios
Featured
An Introduction to Paragon ST