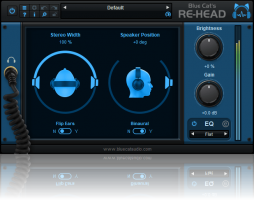 Blue Cat Audio has released an update for Re-Head, its plug-in created to make using headphones easier for musicians and audio professionals.

Re-Head is a plug-in which aims at re-creating a room experience when using headphones. While it cannot replace studio monitors or a guitar cabinet in a room, it makes the transition from speakers to headphones and vice versa less dramatic.