Brainworx has announced the release of bx_shredspread, a new intelligent M/S stereo width and tone control plug-in for Windows and Mac OS X in VST, AU and RTAS effect plug-in formats. It costs €119 but can be purchased for €89 until the end of September, 2010. If you own any other Brainworx plug-in it can be yours for just €59. 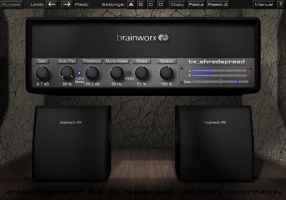 bx_shredspread is a stereo processor to be used on any stereo guitar subgroup or stereo guitar channels. Its main purpose is to make sure your stereo ("doubled") guitar signals sound "wide and phatt" - as easy and fast as possible.

Stereo-guitars that have been created by recording several mono tracks (aka "doubled" guitars) will benefit best from the auto-correcting features and the "SHRED-filter", but bx_shredspread will work on conventional stereo guitar sounds and stereo samples as well, of course.

Although mainly created for guitars bx_shredspread may also be used on keyboard groups, organs, choirs, etc.

bx_shredspread is a tool to control panning, stereo width and the "tone" of your stereo guitar tracks / groups. It automatically avoids typical phase problems that can occur when using M/S technology via some sophisticated algorithms for stereo width, EQ and pan.