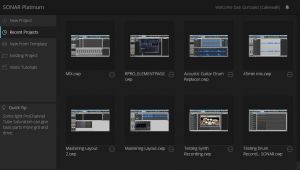 Cakewalk has announced the Hopkinton update to Sonar Artist, Professional, and Platinum.

As the gateway to Sonar, the new Start Screen is designed to make it easier to locate and load projects, check out the latest Sonar news, choose templates to kickstart projects,"pin" projects to prioritize them, scan project thumbnails, and more—including a rotating series of tips. With its visually enriched design, the Start Screen is intended to be about staying creative by providing a straight line between inspiration and music creation.

In addition the update adds six new FX Chains that complement the new Mastering Project Templates. These FX Chains can help enhance stereo mixes—from smooth to seriously intense―and are additions to Sonar's ever-growing collection of FX Chains Presets. This update also includes multiple fixes with an emphasis on graphic improvements to waveform drawing, particularly with the Groove Clips favored by many EDM artists.

The Sonar "Hopkinton" release, a free download from the Cakewalk Command Center, is available to all current Sonar Artist, Professional, and Platinum customers. All three Sonar versions are available globally through music and sound retailers, Valve'sSteam Store, and the Cakewalk Store.