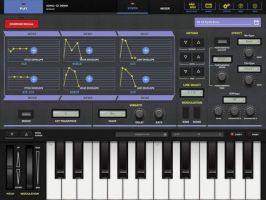 Casio has released CZ App for iPad, which reproduces the functionality of Casio's best-selling CZ-series models, such as the CZ-101 (first released in 1984), and also includes new functions.

Featuring a built-in 4-part PD (phase distortion) sound source, its 36 waveforms are capable of generating an extensive and diverse range of sounds. The created tones can also be played on MIDI-compatible instruments.

Phase Distortion (PD) works by distorting a sine wave when it is read so that various different waveforms are produced. At the time, it was a ground-breaking system for generating waveforms other than simple sine waves. In the CZ series, 8 basic waveforms were generated by the PD sound source, with pairs of those 8 waveforms cascaded to provide a total of 36 basic waveforms.