Centre for Digital Music at Queen Mary, University of London, has released Sonic Visualiser v1.3 - an application for viewing and analysing the contents of music audio files. The aim of Sonic Visualiser is to be the first program you reach for when want to study a musical recording rather than simply listen to it. 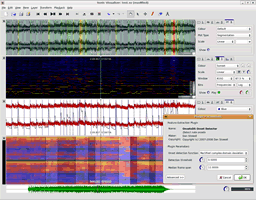 As well as a number of features designed to make exploring audio data as revealing as possible, Sonic Visualiser also has powerful annotation capabilities to help describe what you find, and the ability to run automated annotation and analysis plugins.

Features include sophisticated spectrogram views; multi-resolution waveform and data displays; manual annotation of time points and curves; measurement capabilities from spectrogram and spectrum; playback at any speed; looping and playback of discontiguous selections; ability to apply standard audio effects and compare the results with their inputs; and support for onset detection, beat tracking, structural segmentation, key estimation and many other automated feature extraction algorithms via Vamp audio analysis plugins.

The design goals for Sonic Visualiser are:

Effects plugins: Sonic Visualiser can use LADSPA and DSSI effects plugins. Windows users can download some LADSPA plugins from the Audacity plugin page. Mac OS X users can get some from the Ardour website. Linux users will hopefully have plenty already.

VST, AudioUnits? Sonic Visualiser cannot support VST plugins directly because Steinberg's VST license is incompatible with Sonic Visualiser's GPL license. Windows and Mac OS X users can get limited support using the Audacity VST Enabler, and Linux users can try dssi-vst. There is no such problem with AudioUnits; they just haven't got around to supporting it yet.

Sonic Visualiser is Free Software distributed under the GNU General Public License. Binary versions are available for Windows, Mac OS X Universal Binary and Linux along with the source code.

Sonic VisualiserAnalyser / Monitor
by Centre for Digital Music at Queen Mary, University of London    Free
Add A Review My KVR