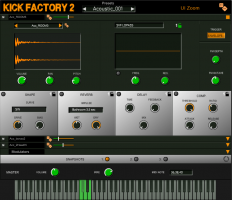 At some point in every producers career they want at least one, if not more, unique selling points and (as world famous producer Trevor Horne says) one of the best ways to stand-out from the crowd is to use original sounds, and there's no more visible and important place for that than in your drum tracks. The factory series, Kick Factory 2 in this case, is set up to easily, quickly and efficiently get you one-off drum sounds that fit well with your track and stand out (just enough) so you don't sound like anyone else.

Kick Factory 2 is a sample based instrument - it uses three layers - in each layer you can select any of the 738 meticulously sampled different kick drums. Channel Robot sampled a wide range of analog drum kits, iconic drum machines as well as some more obscure drum machines. Each layer then has a number of modules to alter the sound; a multi-mode filter, an FM processor, a wave-shaper, reverb, delay and a compressor. Finally in the sound shaping area there are a set of modulators, for velocity, pitch and filter frequency.

There's an intelligent randomisation system for the whole instrument - and another for each voice. So getting to new, interesting and useful sounds is quick.

Every kick drum sound you use in Kick Factory 2 comes in three different snapshots - a powerful facility that gives you three different kick sounds available at the same time. Snapshots are like parameter locks on steroids, you can have two snapshots that vary by just one effect parameter, say filter frequency, or that vary every single parameter - so snapshots can go from subtly different sounds to wildly different sounds - your choice. There's a "Snapshot Auto-generator" button to make things even easier.

Finally there's a master volume control and Channel Robot's Infinite Round Robin Engine (IRRE) which modifies the sound on every incoming note, you're not stuck with 5, 10 or even 20 round robins - this system produces millions of subtly different sounds - slightly changed for every note played. How different each hit sounds is up to you.

A Demo Version is available, offering over 2 hours of playing time.