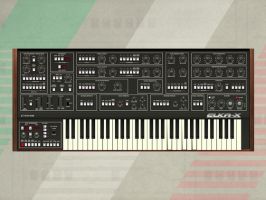 Cherry Audio has released Elka-X, a software synthesizer based upon the rare Italian ELKA Synthex. Here's what they say:

Elka-X replicates the original's exceptional character and luxury features without compromising sound or functionality and expands its features to deliver the authentic Synthex experience at a price anyone can afford. Cherry Audio's Elka-X synthesizer is now available at cherryaudio.com and authorized resellers worldwide at the very low price of only $39.

The Synthex was designed by Mario Maggi and released by ELKA 40 years ago in the summer of 1982. It combined uncommon and forward-looking features that stood out from other contemporary synthesizers, including highly stable digitally-controlled analog oscillators and a flexible four-pole multimode filter. It was multitimbral and even included an innovative four-track sequencer. Notable users of the Synthex included Stevie Wonder, Geoff Downes of Asia, Keith Emerson, Nick Rhodes of Duran Duran, and Jean-Michel Jarre, who used it for his famed "Laser Harp" sound.

Cherry Audio precisely crafted each aspect of the Elka-X synthesizer to sound and behave exactly like a vintage hardware Synthex. Every effort was taken to emulate the prized tone of the original's DCOs, dynamic filter, and chorus. The innovative sound-sculpting and performance features such as layering and keyboard split have been preserved, and the original's 128-step sequencer has been greatly improved.

"For 40 years, I have been searching for the alternative to lugging around the heavy beast that started my career. Cherry Audio have delivered big time, " raves Paul Wiffen, sound designer and synth programmer for Jean-Michel Jarre, and creator of the original Synthex presets, including the famous Laser Harp sound. "They've doubled the voices to 16, retained the Split/Double and Sequencer features that other clones forgot, and there's no compromise I can detect in sound quality or features."

"I had the opportunity to play with the Elka-X and a lot of memories came flooding back," says Peter Howell, who used the Synthex as part of his exceptional work at the BBC Radiophonic Workshop throughout the 1970s and 1980s. "Elka-X has been put together with a lot of love and attention to detail. The Synthex certainly was a versatile instrument and it's great to be able to have access to those sounds again."

As with its other vintage synthesizer and effects products, Cherry Audio has kept the soul of a classic alive while updating its feature set for modern studio environments. Elka-X expands the polyphony and filter modes and introduces mono and unison modes that were absent from the original design. The extended functionality of the LFOs and addition of velocity response expands modulation potential, and a new arpeggiator delivers new performance possibilities.

Unique panel controls make it painless to exchange settings between layers, sequencer tracks, and even different presets. In addition to the original chorus effect, Elka-X adds studio-quality echo and reverb stereo effects, with independent settings for both layers. With additional touches such as chord memory, over 600 pro patches, and flexible MIDI mapping, Cherry Audio's Elka-X brings the authentic and expanded Synthex experience roaring into the 21st century.

Intro Price: $39 (list $59) at cherryaudio.com and authorized resellers worldwide, such as the KVR Marketplace. A free 30-day demo is available. The software is provided as both a standalone application and in AU, VST, VST3, and AAX plugin formats for Windows and macOS, with native Apple silicon support for the highest performance on the latest Mac computers.