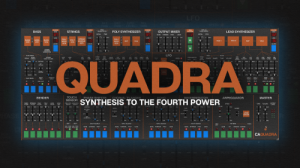 Cherry Audio is capping off the year with the release of Quadra, the highly anticipated reimagining of one of the quirkiest, rarest, and most curiosity-inspiring vintage synthesizers of all time, the 1978 ARP Quadra.

Four On The Floor
During the late 1970s, ARP set out to create a new instrument that combined the best features of several of its existing synthesizers into a single do-everything keyboard. The Quadra merged a mono bass synthesizer, string synthesizer, paraphonic poly synthesizer, and a powerful duophonic lead synthesizer into a single instrument, with the various sections layered across an aftertouch-equipped five octave keyboard. While the individual synthesizer sections lacked some of the control associated with dedicated instruments, there were several surprisingly great features added, including a rudimentary arpeggiator, unique "trill" feature, dual portamento, rudimentary patch memory, and a 14-stage phaser. The layering of these sounds led to endless possibilities, and many artists made great use of the Quadra, including Tony Banks of Genesis, John Carpenter, and Pink Floyd.

However, the ARP Quadra was not without issues. In the late 1970s, ARP was hurting financially, and there was a lot of pressure to build an instrument that could compete with the new Sequential Circuits Prophet-5. As a result, history records that the Quadra was rushed into production too early, and it's full of odd design choices. It's quite fragile and failure-prone. The five-octave keyboard protruded unprotected from the front of the chassis, leaving keys vulnerable to damage. The built-in patch storage only stores the state of a few dozen buttons (and none of the sliders), rendering patch storage nearly useless. All in all, it was poor competition for the innovative Prophet-5, and didn't sell well as a result. For a long time, the Quadra was largely forgotten.

Behind The Lines
Over the decades, the ARP Quadra has inspired endless curiosity. While discussing vintage synthesizers last year at Cherry Audio, they realized that none of them had ever been in the same room with a working ARP Quadra, and they'd long been curious about this unicorn synthesizer. And if they were curious about it, others likely were as well. Cherry Audioset out to find the unfindable: a completely operational Quadra. $7,200 later, they had a fully working unit in their studio.

What A Voyage
Cherry Audio's Quadra introduces improvements throughout every section, bringing out the full potential of the original ARP design. Each instrument section can now be layered anywhere across the keyboard, and they've increased transposition ranges for most sections.

Cherry Audio modeled the ARP Quadra's 14-stage phaser, and added additional effects - chorus/flanger, echo, and reverb - that can also be turned on and off independently for each instrument section. Imagine strings bathed in reverb, a poly synth slowly phasing and flanging, and a lead synth with a slapback delay, all layered together to create a beautiful swirling pad. The sound design possibilities are endless.

Finally, Cherry Audio assembled a team of six sound designers to create a wealth of presets for this instrument. Led by lead sound designer James Terris, they enlisted the help of Katharine Fountain, Huston Singletary, Julie Kathryn, Dave Polich, and Brendan Dreaper, resulting in well over 400 Quadra presets. Each sound designer brings their own style and character to the process.

Four Sides Live
Cherry Audio's Quadra comes in two flavors. "Quadra" is the stereo version, and works like most other virtual synthesizers. "Quadra Multi Out" includes five sets of outputs: a standard stereo mix, plus dry independent outputs for each section, as found on the original hardware.

Cherry Audio continues to design quality ARP-inspired virtual instruments. Their latest offering captures the lush essence and layout of the rare ARP Quadra. Emulating this unique hybrid instrument offers an experience to explore and create that will be welcomed by the synth community. We are grateful that companies continue to build on the pioneering engineering that Alan R. Pearlman inspired through his instrument designs.

Quadra is available now at cherryaudio.com and the KVR Marketplace for $39. It's available for both Windows and macOS, in AU, VST, VST3, AAX, and standalone formats, with a free 30-day demo available.