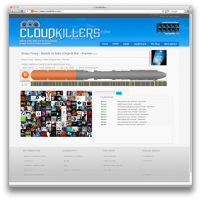 Cloudkillers, a new website "helping artists, labels and the music industry, through human to human promotions", has launched with a new design, new branding and tighter API integration into Soundcloud, which enables many new features to be available to users, including:

Cloudkillers.com has grown massively since being conceived in June 2011. Originally starting out as a pet project between a few musicians, it quickly became hugely popular with SoundCloud users. Its core idea is a web platform, giving artists and labels a tool to promote their SoundCloud tracks.

The idea is simple: you register for your free account, and the site connects with your SoundCloud account, the Cloudkillers.com site lists all your tracks available for promotion and you choose what will be distributed to their users based on your commenting through a unique interface aimed at limiting spam.

The aim is that you comment impartially on all links to gain points (Just as others have to comment on your links) and these points get you comments back. There are options to Favourite and Follow people for extra points or some users offer detailed producer feedback on demand.

This means that the whole Cloudkillers.com user base co-operates to promote you in a positive way (they have a very active community who watch out for negative & malicious spammers on site) – You get exposed to all-sorts of music and the Facebook group is all ears for user requests for features or screams for help.