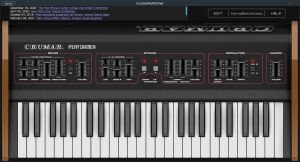 Crumar has announced the release of a freeware edition of the Performer plugin (with limited feature set) only for Linux users.

This version is compatible with AMD64 architectures (Intel PC) as well as armhf architectures, for "single board computers" such as the Raspberry Pi 4 or similar.

The available formats are VST2, VST3 and StandAlone.