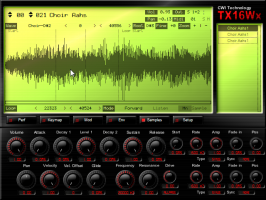 CWI has released version 1.0 of the free TX16Wx VSTi sampler for Windows.

TX16Wx is a 100% free VSTi Sampler with professional features and an easy to use graphical interface - and - one of the few sampler instruments, free or commercial, with a fully documented file format. Not a preset-player or disk-streaming library engine, this is a plug-in for you to make your own sounds, tweak and experiment.