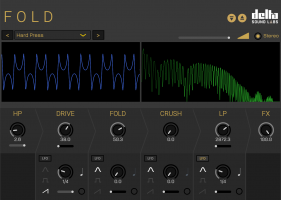 Fold is a distortion synthesis audio effect plug-in that only the engineers at Delta Sound Labs could dream up. Calling on their background in modular hardware design, the team has found a novel approach to creating warmth and distortion in software. By using an assortment of modules in an in-series FX chain, Fold imbues input signals with harmonically rich overtones and, if pushed to the extremes, completely transforms them with a unique form of distortion.

At the heart of Fold is its wavefolding engine. First pioneered by synth legend Don Buchla, wavefolding is the act of folding a wave back on itself after reaching a given threshold. While this naturally produces distortion and harmonics, Fold also ships with a bit crusher module to further smash the input signal. Fold's combination of oversampling, distortion, and wavefolding results in tones that are timbrally rich on one hand, and over-the-top destroyed on the other, even with simple periodic input signals.

To tame the sound, Fold comes with an analog emulation of a resonant low-pass filter that offers more control over any unhinged results. Each parameter is also syncable to its own LFO, each of which has an amount slider and may be synced to a host tempo within a DAW for more creative sound design and mixing effects. Fold also ships with a number of professionally designed presets that showcase the versatility of its engine.

Delta Sound Labs says Fold yields extremely interesting results with low frequencies--try folding your kick drum, any bass register instruments, or simply a sine wave from your synth. Fold can also be used to add high-frequency energy to a synth lead line. This works well in combination with Fold's FX Amount parameter, allowing you to dial in the exact amount of energy you want.

Fold is available now for $49 at ilio.com/fold and in the KVR Marketplace.

Find Fold in the KVR Marketplace