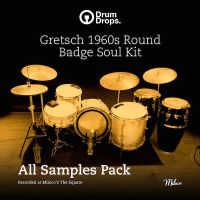 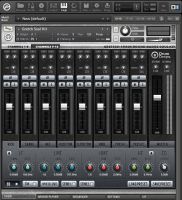 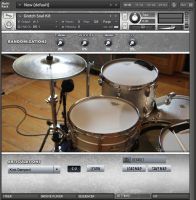 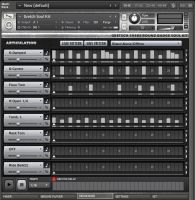 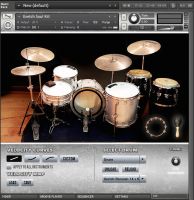 In addition to these five packs Drumdrops are currently working on a new BFD pack which will be scheduled for release shortly.

The Gretsch 1960s Round Badge Kits are legendary kits. Currently they are one of the most sought after kits from that era. Drumdrops recorded this kit to capture a certain sound, the sound of the late 60s and early 70s that came out of the Royal Studios in Memphis. Home to legendary producer and founder of Hi Records, Willie Mitchell. This studio was responsible for recording hit after hit from famous Soul Artists such as Al Green and Ann Peebles. Drumdrops studied and recreated the drum sound.

Unlike the one microphone, large open room drum sounds coming out of Motown and Stax in the 60's/early 70's, Willie Mitchell preferred a small dry room, often using three or four microphones on the drum kit. To capture the same sound Drumdrops used the suited dry live room at Miloco's The Square. The concept behind the mic positioning is unique to this release. They used four mic's, each placed in carefully selected positions around the kit, so each mic captures the drum kit as a whole, meaning you can use any one mic as your drum sound, or you can blend any or all of the mic's to create your ideal sound (depending on the pack you purchase).

The drum kit was produced, mixed and recorded by South London drummer Timmy Rickard who has studied the grooves and sound of this great era. The kit is a classic sounding late 60s kit with wallets placed on the tuned down snares, a tea towel was used on the floor tom and they have recorded the ride with and without a chain.

The recording took place in Miloco's The Square Studios in London. As only five microphones were used Drumdrops utilized the vintage external mic pre's (Telefunken V76's, Neve 1066, Calrec PQ1061) recording straight to Pro Tools. All of the kit microphones used were ribbon microphones. They used 3 x Coles 4038 ribbons around the kit and for the overhead an STC 4021 ball & biscuit. Drumdrops also setup a room microphone which was a U47 FET running through a Calrec PQ1061 Mic Pre. In the Kontakt 5 pack all five microphones can be accessed on every drum in the mixblend feature.

The "Kontakt Pack" has been designed exclusively for the latest full version of Native Instruments Kontakt 5. The pack includes up to sixteen velocities of each articulation and up to 5 round robins. In total it contains 17275 samples. Included in the Kontakt pack is the latest version of the Drumdrops Kontakt 5 instrument. The key features are:

The Kontakt 5 Pack of the Gretsch 1960s Round Badge Soul Kit is available to pre-order now from the Drumdrops store for £25.00. People who pre-order now will get about 40% off the full RRP (£45.00). Drumdrops will also create a voucher so that the person can buy any of the other packs from this kit with a 50% discount. This offer is a limited pre-order offer until the kit is released. Drumdrops expect to be able to deliver the Kontakt pack in early November.

The "Multi-Velocity pack" is suited for customers who want multiple velocity levels of each articulation. You can either use the built in patches or build your own using the samples included. The pack includes up to sixteen velocities of each articulation totalling 735 drum samples. All of the samples are mixed from a combination of the five microphones recorded as 24-bit 44.1 kHz WAV files, meaning they can be loaded into almost any sampler or drum machine. To make things easier they have included patches for some of the most commonly used software packages. The Multi-Velocity Pack of the Gretsch 1960s Round Badge Soul Kit is available exclusively from the Drumdrops store for £15.00.

The "Single Hits Pack" is suited for customers who only need a few velocities of each articulation. It is the same as the Multi-Velocity Pack except it includes only three velocities of each articulation. In total it contains 180 stereo drum samples. All of the samples are mixed from a combination of the five microphones recorded as 24-bit 44.1 kHz WAV files, meaning they can be loaded into almost any sampler or drum machine. Drumdrops also provide the samples in this pack as 16-bit WAV files for the legacy drum machines such as the Akai MPC60. The same patches as the multi-velocity pack are included. The Single Hits Pack of the Gretsch 1960s Round Badge Soul Kit is available exclusively from the Drumdrops store for £7.50.

The Drum Replacement Pack of the Gretsch 1960s Round Badge Soul Kit is available exclusively from the Drumdrops store for £12.50. Head over here to find out more.

Listen to some sound demos of this kit here.