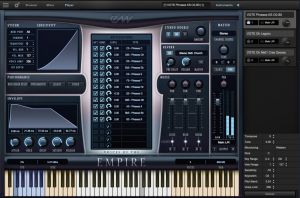 EastWest/Quantum Leap has released Voices Of The Empire, featuring the raw, primal vocals of Uyanga Bold, which they say is perfect for composers creating epic film/TV/game soundtracks.

Uyanga Bold is a unique talent, melding the ethnic musical traditions of Bulgaria, Serbia, Mongolia, and beyond. She is a trained opera singer with perfect pitch, fluent in Russian, Mongolian, French, English, and German. In Voices Of The Empire, East meets West like you've never heard before. Uyanga's voice is beautiful, pure, otherworldly, haunting, unsettling, powerful, genuine in its ethnic flair and world class in its precision.

The PLAY Software has been updated to v6.0.3, featuring the following changes:

Find Voices Of The Empire in the KVR Marketplace

fool me once EastWest. Not buying single products ever again lol.