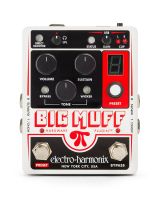 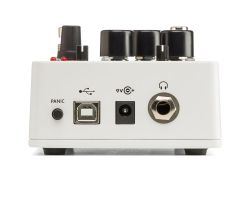 Electro-Harmonix has announced the release of the Big Muff Pi hardware plugin. Here's what they say:

The Big Muff Pi Hardware Plugin is a new type of product which transcends the limitations of traditional DAW plugins to bring the desirable qualities of analog sound to digital recording artists and computer musicians.

The Big Muff Pi Hardware Plugin can also be used as a stand-alone pedal. Its circuit design is that of the renowned 1973 Violet Ram's Head Big Muff, and the classic pedal has been updated to be true stereo. It also includes Tone Wicker and Tone Bypass as well as ten footswitch-accessible presets.

The new Big Muff Pi Hardware Plugin can function as a 2-in/2-out USB audio recording interface which enables the user to record with or without the Big Muff effect engaged. It is powered via its USB 2.0 Type B port or the supplied EHX 9 Volt power supply.