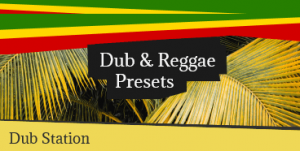 FeelYourSound has released Dub Station, a free Dub and Reggae songwriting package. It contains over 60 free patterns and presets for the songwriting tools Sundog Song Studio and ChordPotion.

The included MIDI generators and chord transformation presets can be used to create Dub and Reggae basslines, backbeat rhythms, organ patterns, and melodies within seconds.

The presets work best with simple closed root triads. Simply pick two triads, create a short chord progression with them, and use the package presets to create your own songs.

Price: Free. All presets can be used royalty-free for both commercial and private productions.

You can see some of the presets in action in this video: YouTube/F2Esn_iF2TQ

"Dub Station" is another addition to the growing collection of free ChordPotion and Sundog preset packages by FeelYourSound.