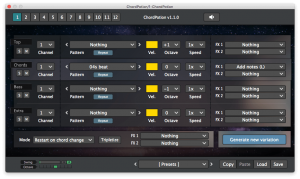 FeelYourSound has released version 1.1.0 of their MIDI effect plug-in ChordPotion (VST + AU). ChordPotion is a composition tool that can help you create new harmonic phrases and melodies within seconds.

Using ChordPotion, you can improve your songs and arrangements with authentic and professional patterns that are designed to react to your chords. You can mix and combine different playing styles with each other to create your own unique recipes. You can also export the generated notes as standard MIDI files and edit them later on.

Price: $49 / €45. The update is free for all customers. A demo is available at feelyoursound.com/chordpotion

This video shows ChordPotion in action and explains the user interface:
YouTube.com/watch?v=OHTUtOIiPvg

Some of the new pattern effects are also shown in this House tutorial:
YouTube.com/watch?v=gBvdsDat80I

This looks interesting but as a non-keyboardist I am wondering if there is a related software plugin that could create/suggest chords for my melody noodelings. or for that matter, if there are any competitors to this product where the choices made are more like driven by sliders of parameters rather than choosing from drop-down lists.