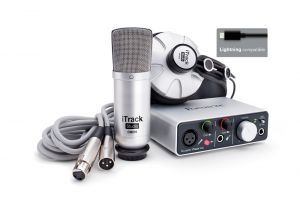 iTrack Solo is a 2-in, 2-out iPad, Mac, and PC audio interface featuring a genuine Focusrite mic preamp. With a dynamic range of over 105dB and unique gain halos that show you when your recording signal is at the right level, it is billed as the best way to record your sound, whatever your platform. Simply plug in your guitar and microphone to record both in pristine quality.

iTrack Studio features everything you need to record on your Lightning compatible iPad, Mac, or PC: a carefully chosen condenser microphone, professional headphones, and all the cables and software you need to get started.