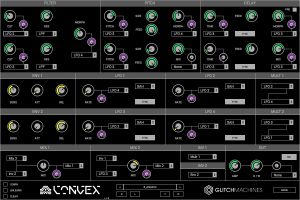 Convex is designed to facilitate the creation of contorted artifacts, syncopated patterns and skewed digital textures. Based around three classic effects; multimode filter, pitch shifter and delay, Convex generates dynamic variations of the input signal by morphing between two instances of each effect and modulating their key parameters using an extensive array of control modules.

Driving its core are 4 LFOs with optional tempo sync and 2 envelope followers which can have their output inverted or combined using mixers and multipliers.