Green Oak has announced that the Crystal Soft Synthesizer is now available for the iPad/iPhone/iPod Touch. Long a favorite synthesizer on the desktop, and updated a few days ago, the synthesis capabilities of Crystal are now available in the palm of your hand. 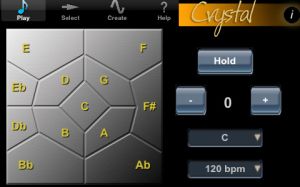 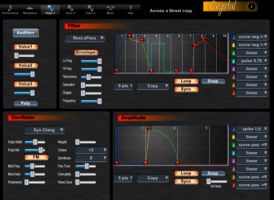 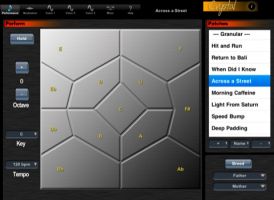 Browse through the included sounds and use the 1 octave keypad to trigger notes to produce evolving, rhythmic, or melodic sounds. Create your own sounds with a single button press using the breed feature. When using an iPad, you can delve into a tweakers dream by using the extensive editing features to sculpt sounds to your heart's content.

Crystal features both subtractive synthesis and frequency modulation (FM) synthesis. It offers abundant modulation control with over 90 parameters which may be modulated, multi-stage envelopes with graphical editors, extensive tempo sync of envelopes/LFO rates/delay times, built-in effects for chorus/flanging/comb filtering/echoes, and a band splitter for effects processing by frequency band. Not only that, Crystal has wave sequencing and granular synthesis.

Two Different Crystal Mobile Apps
There are two different versions of the mobile Crystal to choose from, Crystal and Crystal XT:

Differences between desktop and mobile versions of Crystal
The mobile version lacks only the following features compared to the desktop version:

The mobile version adds the following features compared to the desktop version: