H.E. Audio has announced the release of the commercial version 1.0 of Acoustic Guitar (Steel), which is described as "very simple and convenient, and is easy to operate even for users who are not familiar with guitar". Acoustic Guitar (Steel) is available for Windows as a VST instrument plug-in and it costs $199 / €149. 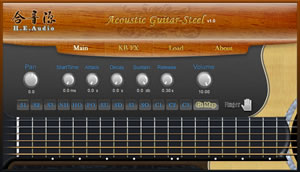