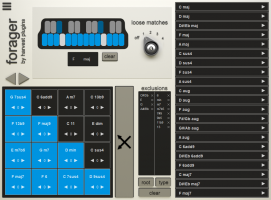 After receiving user feedback, Harvest Plugins has given its recently released plug-in a quick update. Forager is a MIDI plug-in designed for writing chord progressions which combines randomization with user parameters.

Forager was updated to address the most pressing issue present in its first version, and will now recall the chord grid from project to project. Improvements are still underway, but this update should prevent any major losses of work while using Forager to write music.

The complete patch notes are below:

The update can be obtained here.

For email notifications of updates, there is a link to a sign-up form on the page linked above.

Forager is still on its introductory sale, and is available for 50% off, which is $24. This sale is ending on Friday, 12pm PST.

New Loops September Sale: Up to 65% off sounds and presetsSee All #KVRDealsSee All KVR Marketplace Deals